In response to a letter from Senators John Thune (R-SD), Amy Klobuchar (D-MN), John Hoeven (R-ND), Kevin Cramer (R-ND), Tina Smith (D-MN), Jon Tester (D-MT), and Steve Daines (R-MT), USDA made several announcements. First, USDA will indefinitely extend the deadline for producers to return the pre-filled applications for Phase 1 of the Emergency Relief Program (ERP). A new deadline will be announced after the last Phase 1 applications are mailed and provide at least 30 days following the mailing. Continuing to build on the initial mailing of pre-filled applications in May, USDA will continue using existing information in USDA and crop insurance files to send additional pre-filled applications starting this week for potentially eligible Non-insured Crop Disaster Assistance Program (NAP) participants. Once applications from eligible NAP producers are returned, these producers are expected to receive about $105 million in ERP payments for eligible losses from 2020 and 2021 disasters.

The following producers should expect to receive an ERP form in August: Producers who had an eligible loss in 2020 but the loss had been recorded under crop insurance records as a 2019 loss (e.g., prevented planting claims); and producers with policies that required additional information, including Supplemental Coverage Option (SCO), Enhanced Coverage Option (ECO), Stacked Income Protection Plan (STAX), Margin Protection Plan (MP) or Area Risk Protection Insurance (ARPI), before USDA was able to calculate an indemnity for 2021 losses. USDA is also said to be considering how to address concerns noted by the senators that the 75 percent rule could unfairly preclude farm families from being eligible to receive the higher pay limitation.

USDA Increases LIP Payment Rates for Calves Under 400 Pounds – Senator John Hoeven (R-ND), Ranking Member of the Senate Agriculture Appropriations Subcommittee and a senior member of the Senate Agriculture Committee, announced that the Farm Service Agency (FSA) has updated its payment rates under the Livestock Indemnity Program (LIP) for calves weighing less than 250 pounds, which will now be valued the same as non-adult cattle weighing between 250 and 399 pounds. USDA has also increased payment rates for calves under 400 pounds to reflect the increased cost of these livestock more accurately in 2022. The FSA announcement follows efforts by Senators Hoeven, Kevin Cramer (R-ND), and John Thune (R-SD) to ensure the LIP national payment rates reflect actual market rates to help ranchers more effectively recover from losses due to severe spring storms. LIP applications that were already paid in 2022 will be recalculated to include the updated amounts. 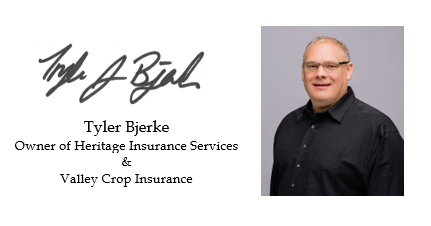 As an independent insurance agency, our goal is to assist you in all your insurance needs. We will help you manage and plan for all your potential risks. As professionals, we assess your needs and offer you a variety of insurance products to choose from.

Service, whether it is in response to an insurance claim or general question, is the most important value we offer you.

We work hard to build a trusted relationship with our customers. We strive to make you feel both comfortable with and confident in our abilities by acting as your consultant. We are an organization dedicated to our customers. We seek out the best companies that offer the appropriate coverage's at a fair price.